It's 2am, and I am writing some shit. I'm working.

I might be taking a full-time job again. I want to do it, and the bosses seem okay with it. Am just waiting for the black and white, and I don't want to consider anything as a done deal before it is all written and stuff.

This is Raya season, Eid season, so I can't help but wank and be reflective and shit.

Man, a few months ago, I was in a very busy state. Extremely busy. So much so, I couldn't even breathe.

Did I give up? Fuck you! Rhetorical question, bitch!

Y'all know me. Still same OG. But I been low-key. Hated on by all these niggas with no cheese, no deals, no keys, no snowmobiles, no skis. - Dre

If you don't like it, you can suck my bulbous dick. A thing of writhing, pulsating monstrosity.

Took a while, but I think things are falling into place. I worked really hard for some of the stuff I have now.

Nobody asks about what I had to go through just to food on the table. Hypothetical table, of course. I don't own a table.

All those sleepless nights, very much like this one, squeezing my brain till I sometimes felt like I was going to drip brain from my ears.

I didn't complain, though. I do not believe in pain as a currency, or that pain entitles you to stuff. I think that's bullshit. ANyone - everyone - has the capability of going through pain.

Oh, so you were never given a chance. Well, fuck you! Join the club, bitch!

But maaaaaaaaaaaaam! Nyenyenyenyennye. BITCH! Fuck you. Fuck all of you who think you had it bad or you have it worse than everyone.

Nobody had or has it worse than those who went through Sudan, Rwanda, Bosnia, blablabla. There is still slavery in some parts of the world, so quit your whining and get to work, you son of a bitch!

My father had to work harder than the pyramid slaves of Egypt, just to ensure food was abundant.

I hate food wastage. I hate it when people buy an expensive meal which they don't even know how to appreciate.

These past few years, I actually tasted, relished and felt each mouthful of food I shoved into my face-hole.

And then, I get people coming up to me and say, "I think we should follow my principles."

"And what principles would that be?"

"Oh, I don't know, something liberal and shit. Nyenyenyenyenye."

Fuck you. Take your pandering, bullshit ideals, spit-shine them up real nice, turn them motherfuckers sideways, give it a little tender kiss goodbye and SHOVE IT UP YOUR SHITHOLE. Shove it so far up, you could taste your own bullshit.

I know how it works. You pretend to be a character, and then hope people would place you in a box you like.

Wake up and realise this: No one has any time for you but yourself. Nobody gives a shit about you. You are not the center of the universe. Grow up and grow a pair. Balls, boobs, half-boob-half-balls, whatever, man.

Quit it with the popularity contests cause you know what? 99% of you are NOT popular. Beyonce - she's popular. Scarlett Johansson? Popular. You? You're a shit on a stick, compared to them. 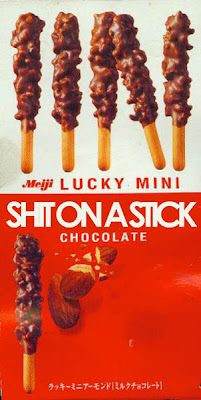 Nobody loves you. Nobody cares. They're all faking it. So fuck you.

Me? Well, I got nothing to say, except you're all dipshits and you can suck on my cock and lick my bunghole.
Posted by Amir Hafizi at 2:00 AM