Back home, before blenders, my family used to rely on this thing: 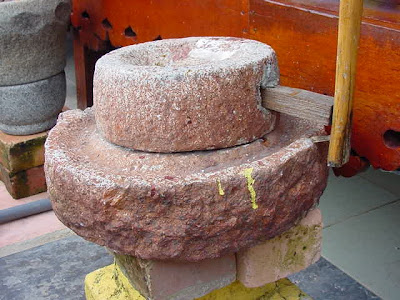 It is used to make rice flour as well as soy milk by grinding the damned things.

My mother used to sit and grind all day, while cursing.

She would swear and curse with such ferocity and emotion. I was entertained just listening to her.

There used to also be an old woman who lived with us. She was my father's adopted aunt.

She lived with us for years. The old woman, my adopted grand-aunt, was said to have supernatural powers.

She could do some incantations to cure minor ailments such as stomachaches and crying. Yes. Crying was considered a sickness.

My father used to try and write down her magic spells. The first time he did it, this was what the old woman said.

WHen my father asked her to repeat the incantation, she would launch into another, different tirade of insults, curses and the like.

All around my village, if you poke some old people in the ribs, they start to weave magic spells. Here's a choice incantation:

I have never seen a ghost or any supernatural case. I believe that black magic is just pure bullshit. Used by people with bankrupt egos to prop up their insecurities.
Posted by Amir Hafizi at 6:57 PM