Read, in the Name of Thy God

For all my noir posturing, I have never been into noir fiction other than Sin City. I've read Dashiell Hammet and a great number of penny-dreadfuls. Pulp fiction was a necessary reading when I was younger, because most of the books my family raided from the Pahang State Library dumpster were old ones. Dusty tomes with no colourful covers.

As a young kid, I was more intrigued, however, with books that had interesting covers. Some of them, were the collected tales of Sherlock Holmes, Hercule Poirot and a great number of Enid Blyton mysteries.

People nowadays so want to write the next Harry Potter, when JK Rowling simply wrote in the style of Blyton with some magic thrown in.

Granted, there are similarities between Rowling and TH White's books. To me, though, reading Rowling - which I consider part of my job but has turned out to be quite enjoyable - is very reminiscent of discovering Blyton as a child.

There is a British fixation with food, in children's fiction, and I believe this is because, as Neil Gaiman wrote in the short story Shoggoth's Old Peculiar, "... the British treat food as some sort of punishment."

When your surroundings are as such, the art tends to either go in two extremes - realistic or as fantastic as possible. And in the world of British cuisine, a well-made afternoon party with scones and cakes and blueberry tea is as fantastic as dragons and liches and good old witches.

In fact, Blueberry Tea is the title of an old Blyton story, about a boy who lies in order to get blueberry tea. Nowadays, all he has to do is buy a bottle of Pokka Blueberry Tea.

Sherlock Holmes' stories are rather dry and in hindsight, quite simplistic. It was the CSI of its time, with Holmes foraging for cigar ash and soil (he supposedly wrote papers on different soils around London and various types of cigar ash), but of course he had no mass spectrometers and whatever.

These tales led me to read about biometrics long before I was to encounter the modern version of it in college.

Before fingerprints, there were experts who tried to convince criminologists that biometrics is the answer, as the size of someone's head, cross-referenced with the length of his earlobes are unique, for instance.

Fingerprints and iris as well as retinal patterns only became feasible many years later.

For some reason, I was also very much into science fiction, though the covers of the old books - which often depicted geometric shapes and unrealistic robots were as potent as valium.

Michael Whelan's covers, though, made for an enticing read.

Here's one from the John Carter series: 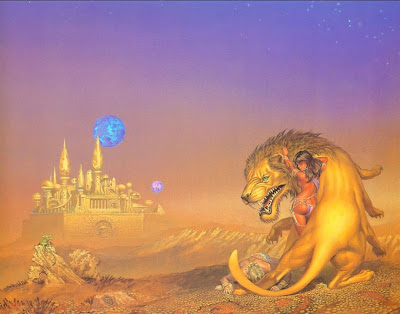 And here's one of my favourite Whelan work: 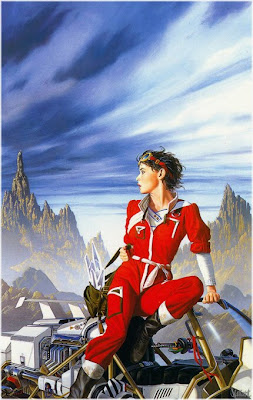 I used to read indiscriminately. Nowadays, my time for reading has been lessened by the fact that I write for a living, which should not be the case.

I'll be writing tonight, perhaps till tomorrow morning. So for now, I'm going to go off and read.
Posted by Amir Hafizi at 3:10 PM