Insecurities Commission: Politics of 'The Other'

In today's Insecurities Commission, we shall talk about group dynamics and the ego.

Many years ago, I was part of a team that was trying to raise RM20,000 for an orphanage. Our deadline was roughly a month.

It was both pain and pleasure as, a couple of weeks in, the more insecure members of the group started to point fingers at each other. A few people quit.

Then, the organisers or facilitators or the demon-priest Cenobites decided to step in. 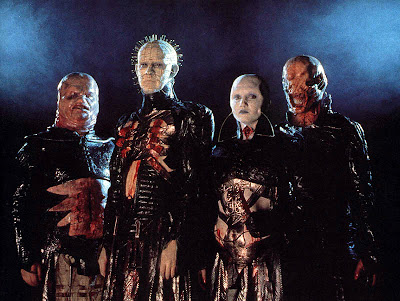 Cenobites: Explorers of pain and pleasure

They introduced us to another, similar group who would 'help' us. This triggered our collective ego, as most may have felt that we were considered not good enough to do the job, which was going rather well, actually, despite the drama.

I remarked to another member of the team at the time, that this was similar to a psychological experiment mentioned in Peter Gray's Psychology text book, the chapter on the Eagles vs the Rattlers, which I have on my bookshelf (and I am mentioning this to show how smart I am).

In the experiment, a group of kids at a summer camp were separated into two - the Eagles and the Rattlers. Both groups soon found identities and labels to latch on to as well as labels for the opposing team. The Eagles considered themselves superior and better coordinated than the 'disorganised' Rattlers. The Rattlers believe they are cool and condemn the Eagles as arrogant sticks in the mud.

The guy gave me a blank look, and as my own individual issue at the time was my unwillingness to step forward and kick up a fuss for no reason, I decided to keep my thoughts to myself.

Long story short, the team managed to pull off the 20K fundraising while the other team was busy doing their own project and that was that.

Eight years later today, I can't help but wonder if we had actually gone into the whole thing with a more positive and open attitude, could we have done better?

Imagine if we simply included the other team. We would have more bodies, more minds and ultimately more resources. The intention, the goal was to raise funds for a fucking orphanage, not demonstrate how big our penises or clitorises were. Are. Whatever.

I am constantly reminded of this project whenever I work with other teams or even other people. Hate, insecurities and fear bring with it the seeds of destruction and as the Lord of Destruction, I know all about it.

I was later thrust into production, where it is a hugely collaborative medium. I can't very well worry about what the props people are doing, or whether the costumes are correct or even if the actors are given proper motivation. Worrying about other people's responsibilities and work only meant I would lose sleep worrying about nothing. The others will do what they do, regardless.

The collective ego and group paranoia was demonstrated in Lost. The survivors of Oceanic Flight 815 literally encountered 'The Others' and both groups behaved like in classic psychology. Textbook psychology. The Eagles vs the Rattlers.

Ah, who cares? I'm a berserker, what do I know? BERSERKER BARRAGE!
Posted by Amir Hafizi at 12:42 PM