Coming back from a hectic day at work, I put on the Neon Genesis Evangelion DVDs and watched the Rebuild of Evangelion - director Hideaki Anno and Studio Gainax's re-telling of the story of Eva - and realised very well that Evangelion was my first introduction to Judaism.

NGE had angels named in the Abrahamic tradition, trying to bond with either Adam or Lilith - an exclusively Jewish construct of the first woman. When they combine to initiate the Human Instrumentality Project, it is in the form of the Tree of Sefirot - the Jewish Tree of Life.

All this religious symbolism and signifying, while featuring this: 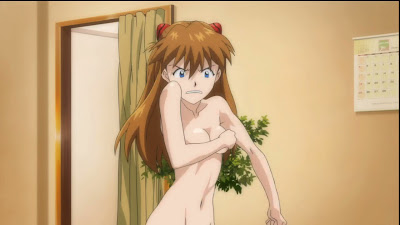 Yes, that is from an extended nude scene from a recent movie of the original cartoon series. So you have religious dogma being used as a basis for a giant robot cartoon, teenage sexual tension and naked cartoons - an explosive combination that sadly, for some, resulted in them purchasing this: 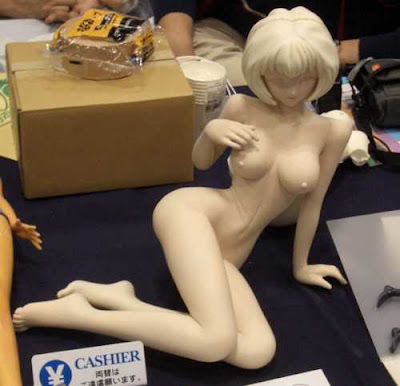 Nothing says "Freak!" louder than naked dolls on your desk.

Hideaki Anno also loaded the whole anime with psychoses. NGE was a psychological tour de force which fascinated me because I was studying psychology to show how smart I am. I was very insecure with my intelligence back then because everyone thought - thinks - I am stupid. Or gay. Or a Hindu. Quite unrelated, but these misconceptions are all I deal with every day.

I have since outgrown this childish insecurity by realising that everyone is stupid - or gay. Or Hindu - and accepting that fact with my Buddha powers.

Personally, I don't like the Evangelion robots. The very concept of very rare, special robots built for exactly one, 'chosen' pilot irks me. I prefer the Robotech mecha, which are mass-produced.

If everything is mass-produced and the same, then the only difference would be the man behind the machine.

This is why I like PCs. Completely customisable to your own specifications and how you want to use it. There is no predestination determined by one will, one way. Just free will.

I do not like Apple simply because their products make it so hard to exercise free will. There is no freedom in using their stuff. There is only one way - the Apple way. It is the vision of only one man. Or one team. And I find that just as disconcerting as listening to the wisdom of the crowd. I hate both absolute states.

Gonna go sleep now. I've pretended enough that I am oh-so-smart and know what I'm talking about. The self-deprecating humour signifying that I am better than what I have written. Oooh. Depth.