I have been playing the Heroes of Might and Magic series for years. Now it's Heroes 6, but my favourite was Heroes 3.

Favourite alliance was Necropolis. Necropolis units are not affected by morale, which means there is one less factor in the game I need to pay attention to. It also inflicts bad morale to anyone fighting it, meaning yay for me.

Necropolis has the Lich, which is a pretty good ranged attacker, with a poison cloud attack that damages all units within a specific area.

There are also Vampire Lords, which can regenerate with each attack.

And then there's Dread Knights - to me the best melee unit.

See, Dread Knights have this ability to deal a death blow of some sort, which doubles the damage dealt. The effect is random, though, which means something like 20 % or whatever.

If you have a Necropolis hero with Expert Luck skill, this means that a stack of Dread Knights have the potential to deal FOUR TIMES its initial damage.

The seventh-level creature is the Ghost Dragon, which has a 20% ability to AGE creatures it attacks. Meaning, 1 Ghost Dragon vs a stack of 1000 Angels, and the lone dragon has the 1 in 5 chance to halve the HP of every single unit in the stack. ALL 1,000 of them.

Necropolis in Heroes III is truly an awesome side to be on. My number two favourite is the more expensive Tower faction.

Because they have this: 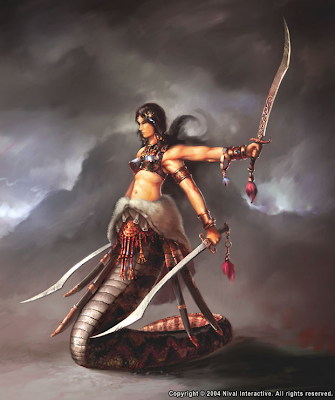 Tower is good because my normal gameplay is resource control. I spent many nights in my youth, playing custom maps where I painstakingly captured and defended each and every mine or mill until the enemy has nothing but second level units it could afford to buy.

I would also defeat their heroes and then recruit them at the tavern whenever possible, because human resource (as well as elf resource, dwarf, undead, demon, djinn, etc) is the most vital resource.

And THEN I attack the last towns, savouring the moment of total victory.

Patience is the last thing I thought I'd learn from playing games.
Posted by Amir Hafizi at 3:51 PM