Tales from the Drunk Side: The Quest for the Best Cut in the World

I went to Kuantan for Chinese New Year as my father's family celebrates the thing. I also had a hidden agenda which I made clear on the very first day I was there - I was going to buy and cook - all by myself - the tenderloin cut of beef, known to Malays as batang pinang.

The last time I tried this, I gave my sister and my mother money to buy the tenderloin, and all they got me was fucking brisket. Brisket is one of the toughest cuts and do you know who eats brisket? Fucking Jews, cause it's cheap.

I actually love a lot of Jewish cuisine, such as bagels and fish sticks, but when it comes to beef, fuck the Jews. Fuck brisket, fuck that weird fish dish, and fuck shorts - the Jews' ultimate invention to ensure Muslim Malays stray from their faith.

Anyway, to educate my family, and to stop them from being conned into buying brisket, I drew them a picture - a diagram - that looked like this: 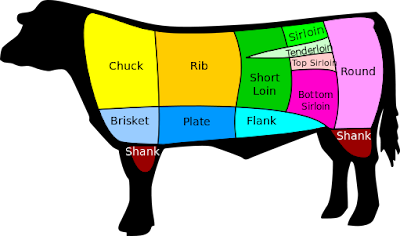 See that? Tenderloin is that funny, conical cut between sirloin and top sirloin. But remember, this is the American cut. Some other cuts such as the British cut has no tenderloin. 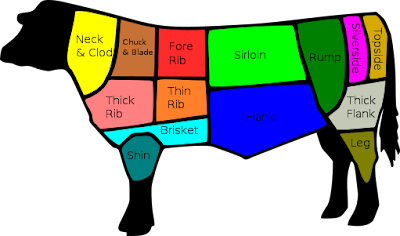 The Dutch cut is similar to the American cut.

There are some BM sites - including the BM wikipedia - that got it wrong. Batang pinang is tenderloin, not fucking sirloin, not top sirloin, you fucking dumbass primitives.

Anyway, as you can see, the brisket is situated usually in the front of the cow, and as the cow's forelegs support most of its weight, the brisket is extremely tough. Briskets are usually cooked as stews or soups - any dish which requires slow cooking to tenderise the meat.

The tenderloin, meanwhile, is a special cut that is very, well, tender and used for stir fry or in steaks such as the filet mignon. Fuck ribeye or T-Bone, people who order ribeye or T-Bone are primitives and amateurs.

Ribeye and T-Bone are prized simply because of the marbling - the amount of fat it contains. The tenderloin is prized for its texture. As I have no intention of having a heart attack, I love the tenderloin cut.

So, after explaining the theory to my family, I got them to drive me to the Pasar Tani Kuantan. The first butcher stand I went to said they do not have 'batang pinang' and tried to offer me their 'most tender' cut - the fucking American brisket.

I walked off in a huff and found a stall that had two python-like almost-cylindrical cuts of the tenderloin, selling at RM23 a kilo. In comparison, the brisket is RM20. So fuck it, tenderloin all the way, baby!

This is fresh local meat, mind you. If I bought frozen Indian beef, the price would be cheaper by 8 bucks, but the Indian cut follows the British cut, so they have no tenderloin. Their best is sirloin, but my father always end up buying topside, which is the cow's butt. I'm not eating cow's butt, so fuck it.

I bought two kilos of tenderloin and rushed home. Local tenderloin is encased in an annoying layer of marbling - fat - and arteries, so I painstakingly cut all of that away, ripping away the arteries with my hands.

I cooked the beef twice in two days - two types of dishes. One is the traditional tumeric and salt, with me finally learning my family's secret recipe. The other is daging masak merah - beef cooked with premium chilli powder and lemongrass and stuff, also a secret family recipe.

The result? Two of the best beef dishes ever. EVER!

While I have already mastered the use of meat tenderisers (the best being jackfruit tree leaves), the tenderloin cut needs no tenderising! The skipping of the tenderising boil step means that the beef flavour is more intense. I have also mastered the art of including the boiling stage into the cooking stage, meaning I end up with meat that has lost some of its collagen, forming a thick beef stew that encapsulates each and every slice.

Fuck briskets, man. Batang pinang is the best in the world!

How to recognise batang pinang - it looks like a snake. A giant snake, cylindrical in shape. It is the most tender cut of all. Next time you go to a steak restaurant, ask for a filet mignon and taste the wonders of the tenderloin.

Or fucking go to a local butcher shop and buy a few kilos. The Australian beef sells it for RM39.90 per kilo, and I would usually skip this cut for the more cost-effective top sirloin Aussie beef, at RM29.90 per kilo. The local beef at RM23 per kilo for - fucking tenderloin - is a steal!
Posted by Amir Hafizi at 1:47 AM