One of my best friends, Sunder, is back in Malaysia, having established himself in Quebec as an art director.

I met him at the Mos Eisley Cantina, Jalan Telawi on Friday night, in a Pre-Deepavali bash.

He has grown...a beard. As well as a bit older. This was not the normal Sunder, who would go on drinking binges as legendary as the heroes of old, for he believes himself as a hero of old.

Sunder: So there I was, after taking my first purple skunk, sprawled on the steps of a Dutch hostel, worried that I would crap my pants and they would find me the next morning, with crap in my pants. So, with all the MIGHT OF SHIVA!!! I hauled myself up and went to the toilet.

That was the Sunder of old.

Nowadays, we talk about management. Or rather, about managing people.

So there I was, at the Mos Eisley Cantina, where you would find no other wretched hive of scum and villany, drinking and talking with Sunder, about management.

Sunder: They should just chill, man!

Sunder: I mean, they can't worry about how they'll fuck it up! Just fucking do it. If they do it wrong, I'll tell 'em. Live in the present! Fuck your childhood dreams of being a rock star. That's in the past! And screwing up in the future is just that - in the future! In this moment, all they have to do is the work!

Me: Total adulation and having fans is fucking overrated, man. Fucking rock star? What the fuck?

Me: You think rock stars - real ones - actually give a fuck about rock star status?

Sunder: Oh, the usual. How many did you lose?

Me: Well, one couldn't understand that at the end of the day, it's the work that comes first. I got no time for fucking popularity contests. The other was too worried about what people were thinking.

Me: And I don't believe in managing people. At telling people what to do.

Sunder: I just tell 'em, you do this and that!

Me: Nope, cause at every juncture, at every thing, it's always a team effort. I had a tough time when I started out, cause I couldn't wrap my bulbous dick around that concept. I was waiting for someone - anyone - to tell me that I was doing a good job. For that, I also needed someone to tell me what to do and how to do it.

Sunder: Burp. Hey, we never had this conversation.

Me: I know. I just put it in so I would have more speaking role.

Me: As I was saying, the hardest thing I ever had to do was to accept circumstances and people as they are. Hardest thing. Ever. I'm the Lord of Destruction. That's my role, I thought, to affect change, for better or worse. Then I got all Zen and shit and realised a few years ago that I was struggling because I struggled. My shoulders were tied in a knot. I was complaining a lot, and I was treating the world as an enemy. I was being a chick. "Oh, woe is me! They did THIS to me! I'm so in pain!"

Me: Exactly. That's all chick talk. I'm a man! An anchorman! Wondrous things began happening when I stopped being a chick and actually manned up, and lived purely in the moment, when it worked. Life doesn't have to be pain and suffering. Let those who worship pain and suffering go and suck the teat of despair from the bosoms of their holy trinity - Pain, Fear, Suffering. Fuck 'em. They can all kiss my ass. I mean, sure, shit happens everyday. But that's what shit do. They happen.

Sunder: So you're all positive and shit?

Sunder: And yet writing this, you want to be understood, yes?

Me: You think people actually read what I write? And how can anyone summarise anything within just a few words? You can spend 40 plus years with a person and never know him or her. What hope does a handful of words have, in order to explain everything? It is impossible. Trust me. I am in the business of communication. I can tell you right now that communication is flawed. This is not a pipe. Geddit? Here, let me pull the picture. 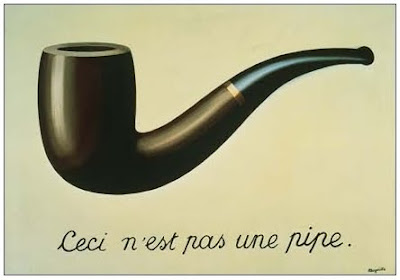 See? This is not a pipe. The Treachery of Images, by some fancy schmancy European dude. I gave up on being understood a long time ago.

Me: The entirety of human civilisation, to serve the needs of the human body. I get ya.

And then Sunder was talking to a French dude, in Quebecois slang, so I continued my rant.

Me: The role of management is simply to allow and guide things along. We are the midwives of things, not the originator of the seed of destiny. Like how journalists are NEVER the source of information. The media is basically that - a collection of mediums. We are the chefs and cooks and bartenders of information, serving it up in a way that the consumers can digest. To think otherwise is hubris. Arrogance. And the pride always comes before the fall.

Me: That's why I believe in freedom. Freedom is the key to everything. Creative freedom results in more creative shit. Freedom of choice results, eventually, in better choices that make more sense. Anarchy's greatest form is that of voluntary order. Where things fall into place on their own. Full automation.

Me: Gaiman wrote this, in The Wake. He wrote:

And the night was over, and the day began.

The stone doors of the mausoleum opened (apparently of their own volition, for there was no one to open them) and the people, and the dreams, and the gods, and all manner of other creatures and beings, went in, each one after its fashion.

And already the conversations and indiscretions and intoxications of the night before had begun to vanish, like the mists of night, in the heat of the morning.

The mourners took their seats, one by one, without hesitation or question. No one directed them, but they walked into their own seats and sat down, as quietly and efficiently as if they'd been rehearsing for this moment all their lives.

The people moved as if their every move were foreordained, as if they had no true will of their own.

As if every action were written long ago, in a book.

Narrator, in The Wake
The Sandman Comics, by Neil Gaiman and various artists.

Me: In Kung Fu, there is a philosophy called moving a thousand taels with one catty or some shit like that. You can observe this in tai chi. They don't fucking hammer things into shape. They let it flow...and then BAM! In science, it is postulated that if you have a long and strong enough plank and a fulcrum situated at the right point, you can move the world with just your own body weight.

Me: In the Robotech novels, Dr Emil Lang sacrificed himself to be a snowflake in an avalanche of things called the Shapings.

And then, the conversation turned even more bizzare as Sunder went on about art theory.

It's nice to see my friend again, and see how his life had changed, for the better.

Sunder: Women, when they see me, generally want to sleep with me. I have that knack.

Well, it's also nice to see that some things never change.

And Happy Deepavali!
Posted by Amir Hafizi at 3:42 AM