NFC Vs KFC: Chicken or Beef?

Unless you were a Malaysian living in a coconut shell the past few weeks, you'd have heard of either the continuing saga of the NFC - the National Feedlot Corporation - and the hot and spicy stories regarding a KFC - Kentucky Fight Club - employee assaulting a customer. 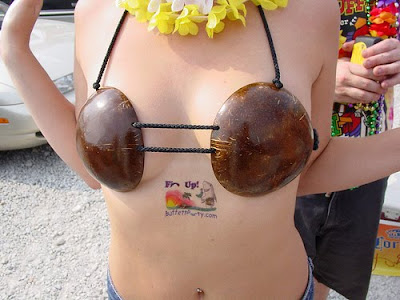 Of course, if you're NOT Malaysian, hot and wearing a coconut bra, then, well, carry on.

First of all, I must say Datuk Seri Shahrizat Jalil who took some vacation time to sue two politicians, may have stepped on a pile of exploding shit.

I think she should have stayed low, allowed the responsible party - members of her family - to face the music, and played the part of the grieving woman who had to show strength by doing so.

No one is above the law, she should have said, and even if it's family, she would have to allow for due process to be carried out. Then cry for good measure. Make herself out to be a victim. Malaysians love victim stories. They would rather believe that than anything else, be it true or false.

This is reminiscent of Dr M's stand when they charged Anwar with Sodomy Episode 1: A New Hole. Dr M was distraught that his protege was hauled to court, but he can't do anything. He couldn't bend the law for his deputy - that would be unethical and a clear misuse of power!

So, with sadness in his heart, Dr M allowed Anwar to go down. Am resisting a sexual joke at this moment.

Anyway, last week, bought - out of sympathy - some NFC beef. Gemas Gold. My only complaint is that it is just as expensive as Aussie beef. I mean, it IS Australian beef, but since you already got RM250 million which you used to buy condos and not, oh, I don't know - buy cows or something - the least you could do is provide a competition for Aussie beef.

As a manly beef-eater, I would laud (as in, laudanum) any move by the NFC to sell cheaper meat. It is also beneficial to them as it would demonstrate to the public that the NFC benefits them - providing high quality Aussie beef at half the price! Or something.

Same thing with the KFC scandal. I believe KFC is doing a good job so far. Acknowledge the fact that no, it is unacceptable for an employee of their restaurant to hit other people. I think they did that today or whatever.

And yes, I do wonder what provoked the kitchen dude to attack the customer. I mean, I have been pretty rude to some waiters because they chased me away from their restaurants or told me I can order, but there's no guarantee that I would get any food.

I'm not saying anyone should be punched in any establishment, especially a paying customer, or that any of this is acceptable. I'm just wondering what the fuck?

Some people immediately point to race. Hey! Assholes! It's not about race. It's about chicken. Please do not politicise poultry.

I believe that KFC should donate RM1 million to a charity of the assaulted guy's choice, in his name. And give the poor man a barrel or two. Giving him money will mean that starting tomorrow, I will insult McDonald's staff over and over again to try and get punched in the face. Two punches and I'm retiring!

And then, KFC should spend RM1 million in a courtesy and good behaviour campaign for their staff, culminating in a PR and advertising campaign to illustrate how their workers are courteous and good-mannered. Make that the cornerstone of Malaysian KFC identity, and fucking move on.

As the world's greatest and most powerful mind, I call on everyone else who are not as well-endowed as me to calm the fuck down. And suck my bulbous dick.
Posted by Amir Hafizi at 12:44 AM