Malaysian Top Dude Najib said he will table a motion to destroy the Internal Security Act(ISA) with a hammer or some shit like that. So before that happens, I want to share my own experience with the act.

ISA was a major beef with human and civil rights people because it is similar to the Patriot Act, or Batman: The Dark Night without high-tech gadgets. It allows the authorities to detain people without charging them. Some people were detained for 16 years.

I believe they're lucky. Because if I was the police, and I think you're a dangerous person, I would kill you and make it seem as if monkeys did it.

Anyway, ISA is also a potentially viable career path. You see, if you get ISA-ed, then released say, three years later - enjoying free boarding and food all that time - you can travel the country giving speeches as a REFORMED ex-ISA prisoner. You can potentially charge around RM5,000 for each of those speeches. That's RM5,000 for 20 minutes, which is slightly below the fees for a B-list rock star.

I started by making fun of the then-Prime Minister of the country, Abdullah Badawi (Pak Lah).

I wrote such things as implying Pak Lah was licking his son-in-law's anus, that the people around him wore tutus at night and jump on rooftops to fight crime, um, that his wife Jean Danker looked like this: 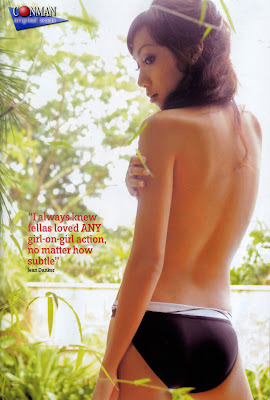 ... as well as an assortment of other things.

I waited for the authorities to bust into my apartment and take me away to the ISA gravy train, but alas, no one came.

I stepped up my online attacks, but still, no ISA.

So I used my clandestine contacts in the military espionage industry (I asked an older journalist) to find out where I went wrong.

Apparently, according to the guy, I would only be ISA-ed for writing stuff if I threaten to reveal sensitive information.

I did not and do not have sensitive information about anyone, any company or any Government, so I was just another guy yelling online. Big fucking deal, and no ISA.

I could have strapped explosives to my ass and threaten to suicide-bomb the capital, but that is just too much work.

Now, with ISA being repealed, I no longer have a potential gravy train, those fucking hippies have one less reason to smoke weed and rape children, and real terrorists will be able to escape easier than before.

I believe this is a bullshit move by the Government, to remove such an easy way to make money. I hope the Opposition do what they do best and complain about everything everyday, including this move by Najib, so we all could have our beloved ISA back.
Posted by Amir Hafizi at 11:10 AM