Barbarian of the East

I twitched, inside - I guess my aorta, thymus and medula oblongata would spasm a bit - every time some condescending, pedantic motherfucker would try to enlighten me how good the ways of the West are.

What the person really meant to say was, "Hey, you fucking ass-turd monkey-fucker! I have been to a white man's country and shit, and I'm better than you, you fucking loser!"

And what I really meant to say was, "Big fucking deal, you fucking asshole! Why don't you take your stupid AppleTV or WD TV Mini or Seagate whatever and rape your grandmother's corpse with it."

I'm not saying that the States, or any Western country sucks. Or that white people are racists. Well, the US sucks in terms of healthcare that could have you sucking all the nurses' dicks if you need a band-aid, but I guess their burgers make up for it.

It's just the blatant racism - albeit perhaps unintentional - that these Asian white supremacists (how's that for a paradox) put on a jolly old Asian chap like me. A regular Charlie Chan, I am.

I've never left South East Asia, so I have been assumed, over the years, as not knowing that:

1. Saying 'having it here' at McDonald's meant I am having the food there and 'take away' meant tapau.

Yes, someone carefully explained this to me, when I was 27 years of age, at a McDonald's restaurant. The person's eyes were perhaps expecting me - Captain Simian of the Spaced-Out Monkeys - to be amazed at this amazing nugget of information that would shed light on the glorious Western culture of death by fast food.

"We were PC, you know? Politically Correct. You know PC?"

"No, no, not PC the computer! PC the politically correct-lah!"

The expression on my face perhaps suggested that I was raped in the ass by Anwar and did not wash my bung hole for 3 days. 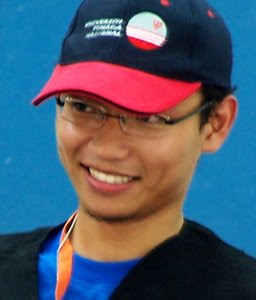 It was THIS expression.

Actually, yes and no. Yes, there are places where theatrical productions can attract boatloads or treefulls of people and make heaps of money, but there is also the same detachment from the general society as it is here.

If you do crappy stuff here, and you take your crappy stuff and do it say, in London, it remains crappy. You might get some mercy, charity, PC applause, but PC applause is like applauding a monkey because it could imitate a human.

If you're good, you're good. You know it, everyone knows it, and you wouldn't be whining and whinging about how nobody appreciates you, because 'nobody' also includes yourself. The absence of yourself as somebody who thinks you're good.

I love Western Culture. I'm writing in English, if you haven't noticed, and I absorb a lot of their shit, before unceremoniously chucking the shit at my fellow Asian monkeys.

Nope. The culprit here are retarded ass-fuck monkey-fuckers. People who are so retarded, they judge other people and assume that since they have breathed the air from the north, they can jump higher and run faster.

Maybe they can. But not as fast as Usain Bolt. And he's Jamaican.