Been working like a dog. Fortunately, there are some good news.

One of the projects my team and I did - a children's show - will be broadcast next year. Malaysia first, then Disney Channel and probably Hong Kong. Full details when I get the official word.

Meanwhile, I noticed that people on Twitter started throwing all hatred towards this: 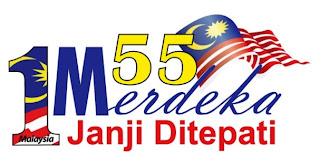 That's this year's logo, which, after being shat on by almost everybody who had shit, Rais Yatim cancelled, took it back and shoved the thing up whoever's ass was handy and available.

While the furor and outrage was impressive, I find it baffling that anyone gave a shit. No one showed any interest before, and this was NOT the worst logo ever.

Take a look at this shit parade:

Click on the image. It gets bigger. No, wait, that's probably not a good idea. In my opinion, ALL of them looked like shit, but that's just me.

The logos looked like someone plonked down a bunch of coloured glass at the end of a kaleidoscope, sketched the geometric shapes, had his retarded 7-year-old colour it using red, whi9te, yellow and blue crayons, and called it a day.

Still, I understand why it had to be crappy. These are designs meant for buttons and t-shirts produced by the Government. The fucking Malaysian Government. It's not supposed to be pretty.

If it looked really cool, Malaysian monkeys would steal them and wear it every day. Not out of patriotic fervour, mind you, but from their freeloading instincts.

These logos also act as propaganda tools, disseminating information in the simplest way possible so everyone - including monkeys - could understand them.

If you got David Lynch to do them, with his questionable Photoshop skills, a lot of people would have committed suicide.

Now, we go back to my favourite monkeys - apes that hop on to the bandwagon and started tearing the shit out of the logo, when they never gave a shit before.

I believe, in my opinion, this has nothing to do with the logo. The logo is just as shitty as the previous 40 years. Nope. I believe it is just a bunch of people finally finding enough hatred in them against the Government, which they express by hating the logo.

Harmless, you say? Yes, I believe so too.

However, it sets a worrying precedent. That perhaps in a rush to hate, condemn and judge, we might also end up hating, condemning and quickly judging anything and everything regardless of the truth.

I'm not taking the Governments side. In fact, fuck the Government. I am just worried that this new vigour in mob mentality will result in infinitely worse things, like the Bastille during the French Revolution, or the war in Iraq after September 11.

Ah, fuck it. My name will be on Disney Channel. Kau ada?
Posted by Amir Hafizi at 8:34 PM