Some people say that I am very unhappy with some of the things that is going on in the world and in Malaysia because I do not live in the moment. Because I live only in the future. Of what will be, instead of what is.

I say, I am pissed off with the idiots. And pretentious people.

Fortunately, the future is not powered by idiots, victims or pretentious people. The future, a billion-kajillion tomorrows, is powered by an almost invisible but definitely present compulsion of the universe. An almost inertia-ic force, if there is such a word, that would force change.

And what is change if not destruction, and I am the Lord of Destruction.

Already, scientists and unreasonable people are creating microchips from protein. From meat. The rationale being that for all of man's silicon and semi-conductor wizardry and lens technology, the greatest camera ever is the human eye, and the best computer is still the human brain.

Imagine computers in the speed of meat. Imagine quasi-organic laptops that latch onto your back like a pet. Imagine 'driving' a giant cyborg crab to work. A crab you only need to feed garbage to, as fuel. A giant cyborg crab that shits fertilizer on...asphalt roads? What the fuck is asphalt? There will be no roads in the future.

And when you're hungry, crabmeat is fucking fantastic.

There are also data storage in crystals. Our pen-drives and hard-drives of the future will be made of crystals. Storing yottabytes (1000^8) of data.

Maybe, there will be crystal implants to our brains, in the future. Accessing the data we stored since birth using quasi-organic computers routed, implanted, directly to our brains.

So the next time Angelina Jolie adopts an African child, she can instatly download Swahili into her brain, to understand the child as soon as it learns to talk - at around 20 days old.

The future of language is also interesting. When everyone can simply plug into decades worth of language training by just replacing their crystal head-cartridges. Maybe there will be a movement to create a universal language.

Idiot: Can I have some pie?

Right now, today, scientists are charting human brain-wave patterns. Every thought has a frequency and it will only take a few generations to decode at least some of them.

This could result in a new form of entertainment, communication and propaganda - mood advertisements, emotional-newspapers and would redefine the term hate-mail.

Places of work, airports and schools might have, instead of a metal detector, an emotion or thought detector, just in case you're a terrorist.

Also being decoded: the human genome.

By 2015, Malaysia will not only run out of oil. The world could be seeing the brith of the LAST blonde-blue-eyed person on earth.

In the future, EVERYONE looks Malay, based on a Time Magazine image composite a few years back. 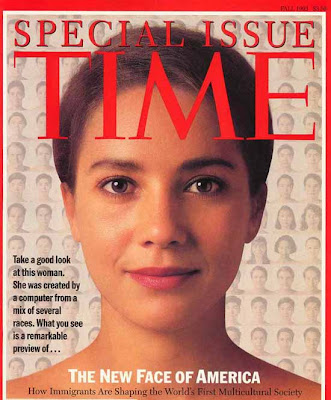 Malay, or Mexican. Who cares?

But by decoding the human DNA, we can preserve the almost extinct blonde-blue-eyed people and keep them safe in zoos, following a proper breeding programme.

It would be the brown-man's burden. All of us, cause we will ALL be brown.

Space travel will be possible, but humans of the future, at least the spacefarers, will have to have at least 5% cockroach DNA.

Cockroaches have a gene that allows them to survive in radioactive places. Space is one of them. When you are in space, a billion-kajillion invisible cosmic radiation passes through you. Without the protective barrier of the Earth's atmosphere, so many astronauts return to earth bearing some kind of sickness and mutation caused by this radiation.

Only by combining our genes with cockroaches' will humanity survive. Because we NEED to find another planet like earth. SOON.

Resources are dwindling down and people are too fucking stubborn to change their ways or leave their cronies behind.

The end result will be a dying planet. Well before the Sun, our Sun, Sol, becomes a Red Giant and consume us whole in its fiery embrace.
Posted by Amir Hafizi at 6:09 PM