What you gonna do when the shit hits the fan? Are you gonna stand and fight like a man? - Eminem

There is a time when you take all those cheesy lessons you learned from Japanese anime, all those things you learned from dumbass Hallmark TV shows and telemovies. When you discard phrases like 'being smart about it' or 'just surviving' to the gutters and holes from which they came.

There is a time to be a man and there was a time, long ago, that 'being a man' does not simply mean taking your dick in your hand and whipping your defenseless wife or girlfriend  with it.

I am many things, but I have never been a liar. Liars find this hard to believe, because they cannot imagine a life - everyday life - without a few lies thrown about to ease their passing. Lies are fibre that helps the pile of shit - their stupid, cowardly selves - to pass along the colon that is life.

One day, you draw a line in the sands and you stand by it and you say, "this is where I stand, and I'm not budging an inch. So fuck you."

So. After this Chinese New Year of the Snake, I will be performing at Merdekarya. It's a thing called "Saya Selaku Perdana Menteri".

Four Horsemen (Three Horsemen and One Horsewomen) of the Apocalypse will stand before an audience and deliver our speeches as Prime Minister of Malaysia. 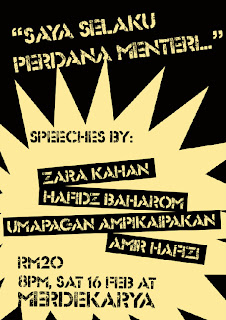 Yes, I am one of those who will be Prime Minister for one night.

All our speeches will be in Bahasa Malaysia, because all Malaysian Prime Ministers must be Malay or have a command of the language. I hope the Special Branch of the police will be there and pay the RM20 fee at the door.

Yeah, you have to pay to listen to us talk. No freebies will be given. There are drinks on sale, as well as classic Malaysian snacks such as Mamee and possibly Twisties. Or at least that is what I heard. You fuckers can't sue me if there are none.

What will we talk about, I wonder? I can't speak for the rest, and if they get arrested for saying something they shouldn't, or if they suck, I dis-involve myself with them and the things they say. I, however, will stand by what I myself say. Every single word of it. The others are also not responsible for what I say, as the owner of Merdekarya have also not been given any drafts or a clue as to what will be performed.

In fact, I have given clues already in this article about the topic of my inaugural speech. I will most probably wing it. And if I get into trouble, it will be well worth it.


I can't find an UMNO baju melayu, so I'll use mine instead.
Posted by Amir Hafizi at 11:48 PM