Merde Kakaaa: A Message for the Government

Hey, BN Government. Yeah, you. With the money and Toyota Harrier and double pocketed white shirts. I want to have a word with you. Nothing hostile, just from one citizen to his Government.

Recently, you guys pushed the Section 114A which curbs Internet freedom and then there was the Merdeka55 Twitter fiasco, and I just want to tell you - you don't have to do all this stupid shit to fight the Opposition.

I've written about S.114A, so now I will write about the MerdekaBot55 scandal.

You went for a million tweets for the #Merdeka55 hashtag, and some people claim to have proof that 38% or more of those tweets are fake.

Is there a way to find out? Hell yes. Do I give enough of a fuck to determine its accuracy? No. But I can tell you this - the numbers are highly unlikely.

Merdeka 55 announced 3.6 million tweets, by 10,000 participants. That's 360 tweets on average per person, on that day, writing about Merdeka55. 360 is around 15 tweets per hour, on average, if we count the whole day. That's one tweet every four minutes?

To me, it just doesn't make sense, logically.

And then, Have a look at all the numerous screenshots of various accounts tweeting the same tweet - this is not an RT, mind you - it's the same tweet, exactly the same, down to the punctuation and spelling errors - if any.

Sounds like you guys are using bots. As if you're... you're BOTS MASTER!

My point is - after this long rambling - is that you did not need to lie or fake things.

Najib, Hishamuddin, Rais, whoever - you guys hold important offices. People will organically follow you guys on Twitter ANYWAY, but why is there a high percentage of fake followers on your accounts? Not ALL of you, but some of the top BN Government people have tons of fake followers.

Did you buy those followers? Did some random 'expert' set up your accounts and in order to show fast results, just bought the followers for you?

IF you or they did, I just want to say: you DID NOT and DO NOT need to do that. It is a totally unnecessary lie.

Which brings us to Section 114A and some of your comm strategy. I get it that you want to stop libel and slander. You want to get those racist fuckers, those liars who sometimes go to news portals and leave malicious comments. I get it. I really do. I'd love it if you get them and give them an ass-kicking.

But fighting lies with bigger lies is not the way. Stopping them using 114A is not an effective way to totally eradicate lies, libel, slander and misinformation.

I believe, say some people want to spin some things politically - make it about BR1M, the RM500 incentive thing - and it is REALLY a good thing, right? You don't have to clamp their mouths shut. 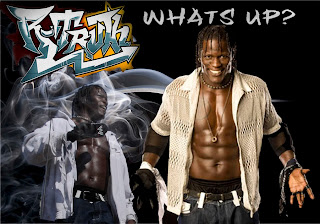 This is NOT The Truth. This is simply R-Truth, a WWE wrestler

Just stand up and engage them properly. Pretty soon, the people will see how much of a lying, racist, holier-than-thou gutless cockroaches the Opposition cybertroopers really are. People are not THAT dumb. They can see for themselves and make their own judgment.

The only thing is to make sure they ARE lying, of course. And that you are not in the wrong yourself.

C'mon, man. What pisses me off is that you don't need all this bullshit. You did not need to fake Merdeka55 (if it WAS faked. Not saying it is, but highly likely it was), you don't need to buy Twitter followers, and you certainly don't need Section 114A when engaging liars online - on their own turf, at their own game - and scoring a simple victory using facts and the truth is much more effective. Especially for a Government that has the resources to do so. You're not an individual, you're a fucking Government.

Instead of paying assholes to try and bully people around like guard dogs online, use a smarter, more efficient way that can win over the neutrals like me. I dare say the neutrals are over 40% of people, and we are the biggest majority. No one speaks for us because we have our own voices.

You want to win the election, right? Get your comm right.
Posted by Amir Hafizi at 11:25 AM