This issue, the 114A Evidence Act amendment or the Act 1432 Evidence (Amendment)(No.2) Act 2012 debate brewing online is a kathoey or lady-boy.

For those unfamiliar with Thai culture or the Thai sex industry, a kathoey or a lady-boy is also known as either a hermaphrodite, a pre-op drag queen or even a 'chick with a dick'. In fact, in Thailand, there are three recognised genders - male, female and everything else that are not these two, is kathoey. 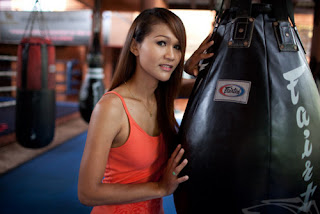 Nong Thoom: She can kick your ass and lick it at the same time

Before we go any further, a disclaimer: I am not a lawyer, but have watched Boston Legal, LA Law, The Practice as well as Law and Order on TV. Anything I say may be wrong in parts or completely off the mark. My sources are people I know on Twitter as well as a mysterious source who called me up just now whom I shall only name as Sore Throat. More on him later.

According to a source on Twitter, the Evidence Act is widely used in all legal shit. It is something that affects any and all cases that has any evidence.

It is not a law that would - as some people put it -  allow the Government (be it BN or Pakatan) to hunt us down and shoot us with mutant-gene-neutralising tranquilizer.

The new section, 114A, however, is sneakily amending this evidence law so that they can at first pin responsibility and accountability of media content on the 'supposed' owner or publisher of a publication or website.

This means that if there is a blog called 'DatukSeriUtamaRaisYatimLovesDinosaurs.wordpress.com', it would be assumed - according to this new section 114A - that indeed, Datuk Seri Utama Rais Yatim has a Wordpress blog and it seems like he likes dinosaurs. I wonder why?

Anyway, say one day, a person using the moniker ILoveAnal were to post an incendiary, seditious comment condemning the Agong (which could amount to treason, according to Malaysian law) on DatukSeriUtamaRaisYatimLovesDinosaurs.wordpress.com, and if a report was lodged, yadda yadda yadda, and after an investigation, the person who would be assumed to have posted the offending remark - again, according to 114A - is indeed Datuk Seri Utama Rais Yatim.

But... how can this be? Say Rais goes to court and proves that:

2. He does not have a blog and DatukSeriUtamaRaisYatimLovesDinosaurs.wordpress.com is not his, by virtue of recorded IP addresses, all of which are not his.

Then THEORETICALLY, he has proven that he has nothing to do with the case. End of story, right? Fuck the legal costs, the time spent, the opportunities lost by our dear good ol' Rais, etc, etc.

Well, have a look at this: 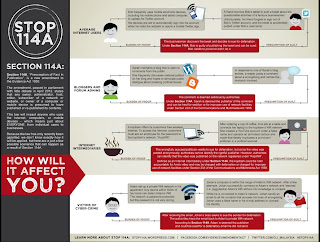 The full infographic is here. It seems that it goes even beyond that, as suggested by the infographics. Is this true?

Well, after talking to quite a number of lawyers (1, non-practising) and judges (0, actually), I have made my own conclusion that it depends on how it is used - or abused - by any party.

There are lots of laws and legal shit that can be misused by almost anyone in this country - inherited legacy laws from days of old which has nothing to do with modern times such as the wife imprisonment/abduction something-something law which was featured quite recently in a high-profile case involving a celebrity who is also a dear friend of mine. (See? I hang out with celebrities! I'm so fucking cool!).

The thing is, we all have to trust ourselves in not misusing or abusing this law - AND ANY OTHER LAW - by lodging lawsuits against journalists, bloggers, the mamak shop and against Mark Zuckerberg. Poor Zuckerberg has less money now than he did earlier this year - ON PAPER. In reality, he actually has more money than before, so fuck him.

Another thing is the assuming shit. This is what people are pissed off about. How can a law assume shit? Can I go to your house and assume your wife wants to suck my dick? How about your 19 year-old daughter? Can I assume that she wants to be gang-banged in the ass by well-oiled Turks?

Some people say that the law assumes guilt before innocence. Two problems here:

1. In order for anyone to be guilty, there should be a crime to associate that guilt with. If there is no crime, indeed, no one will need to worry. If your blog is about dinosaurs, who gives a shit? This narrows down those potentially affected by this law to people some other, more powerful people want to fuck. Should we allow them? I don't know - are they hot?

Those who believe the section would do more good than bad are saying:

1. Most of us will not be affected. Maybe because Malaysians - even evil ones - are lazy.

2. If you do get assumed to be an offender, it is easy to prove that you are not so-and-so because IPs are recorded, the Facebook accounts are not yours, etc.

3. If you didn't do any crime, there's nothing to worry about.

4. This will force responsibility and accountability online. If you own any account anywhere or any website, you have to be more responsible and take ownership for anything that comes out, as if you own a gun, you would have to be responsible for the gun. It will result in a more mature online community, blablabla, etc, etc.

While considering all these facts, I received communication in digital format from someone I will only call Sore Throat.

Sore Throat said that this law is already in the States, that in fact 114A mimics that law, but the difference is that there is a bylaw that defines and differentiates between publisher of comments and publisher of websites, with different liabilities each definition carries.

I told him that we have a precedent, when some people left offensive comments on the Sultan of Perak's online guestbook. Remember that? Here's the link to that story.

With 114A coming into effect, if something similar happened, would the Sultan of Perak be assumed as the one who posted those comments?

And that case was a landmark one because according to The Star report, the dude was  "the first person to be convicted in the summons case under the Multimedia and Communications Act 1998."

Sore Throat believes that there should be either a bylaw to differentiate roles and accountability or the  Multimedia and Communications Act 1998 be imposed instead.

I believe that doing either one will make 114A useless.

And that is why I believe 114A under Act 1432 to be a kathoey - there are some benefits from it, but there are huge negatives as well. This is not a popular stand because I now can't join either side of the argument for moreh.

We shall see how this new thing is used - or abused - before knowing its full impact. I just hope that no one pays the price for that, unjustly.
Posted by Amir Hafizi at 2:13 AM