Hello everyone, and welcome to a message from our sponsor - me!

Maple Comics has come up with three titles to be launched within these two weeks. The first is Merah, then Paradigma Guru and finally a recoloured, remastered edition of Beijing in 5 Days. 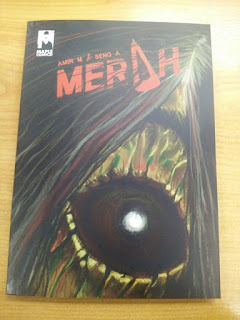 Merah is a comic book by Indonesian artist/writer duo of Amir Muchtar and Seno Aditomo. It was published by AM-SA Studio in Indonesia. Merah was translated into Bahasa Malaysia by Julie Anne.

The story is about a man haunted by a ghost in red. The entire book is black and white except for the ghost, whose dress and blood is a bright red.

This is a disturbing tale that will send shivers down your spine. I guaran-damn-tee it.

This is our second title from Indonesian artists, after Stephani Soejono's Tale of the Bidadari, and we hope to collaborate with more artists and bring more titles from the region to Malaysia. One more title by another Indonesian artist/writer collaboration is coming next year. I can only share with you the working title - Samudra 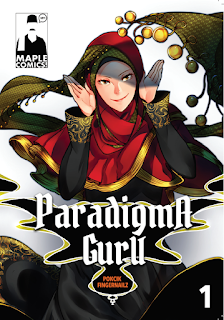 Paradigma Guru is a manga style supernatural rom-com from the excellent mind of Pokcik Fingernailz. Yes, that's his pen name, and we call him Pokcik even though he is 13 years younger than I am. The man's a tender 23 years old but has the comics sensibilities of a seasoned pro.

Pokcik has managed to use manga tropes and styles to tell a uniquely Malaysian story. I was impressed with the story structure, flow, characterisation and humour of Paradigma Guru that hints at Pokcik's well-organised mind. He is indeed a slick executor. 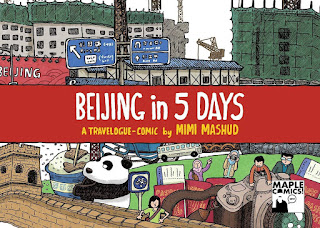 Coming to you next Thursday is the recoloured, remastered version of Beijing in 5 Days. This is Mimi Mashud's very first comic and her original print run was sold out last year so we agreed to recolour and reprint it with the participation of the sublime Tay 'Fishball' Yen Ee. Yen Ee will have another comic book of her own in print later this year, hopefully.

If you are a fan of Mimi's work, you cannot miss out on this comic book. It further cements her reputation and we were not kidding when we said, 18 months ago, that we have found the next Lat and she's awesome.

You can get all three titles at the Maple Comics booth, N33, Pesta Buku Selangor, Shah Alam Convention Center (SACC) until August 7. Also grab our other titles - Invasi, Taubat Si Tanggang, Pelempang realiti, Jejon Di Jepun, Scenes of the Father, Komik Ronyok, and a prototype DonK we did for Taylor's University.

Beijing in 5 Days will be available next Thursday but all the rest can be bought there. Alternatively, you can get most of these titles at our website - www.maplecomics.com.my.

We have more coming in the final quarter of the year, so wait for the announcements to be made soon. We are targeting 17 titles by end of 2016, in time for our second anniversary.