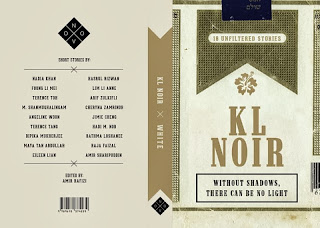 Last night, Fixi Novo - the English line of Buku Fixi - launched KL Noir: White at Kinokuniya, KLCC. I was the host as per tradition, because I am the editor for this edition. It's a tradition that started with the first volume - KL Noir: Red - so it happened just once before, but a tradition it is nonetheless.

It was a good event - good energy, good turnout. I arrived two hours before the event because I thought of planning everything - the flow, what to say, etc. However, the publisher said it is better to leave it organic as some writers might arrive late and there's no way to set up a list of readers to play off each other's strengths.

I'm big on planning nowadays, because I fucked up a few times in my life due to lack of strategy, so I started the event with some degree of trepidation.

I didn't even introduce the first reader properly, but hopefully nobody noticed (until now). But I believe I made amends after he finished reading. The rest was good - had some snafu here and there, but everyone who came got to read passages from their stories.

Already, some early birds have picked their favourites and announced it gleefully on social media.

One writer came all the way from Dubai, in a surprise appearance. Some of my schoolmates showed up, and after what I said about SDAR previously, I am quite touched they bothered to attend and even bought several books.

All in all, it was a good event - we even finished ahead of schedule - and I wish the next volume success. KL Noir Blue is open for submissions starting today. Deadline is Dec 31 2013. You can find the details on the KL Noir Facebook page. Also available are photos: 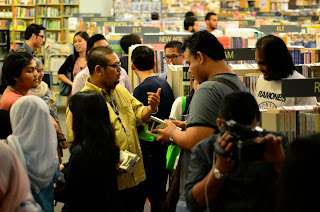 You can purchase Kl Noir: White at Kinokuniya and major bookstores all over Malaysia. If they are out of stock, or if you prefer, you can get them online at the Buku Fixi website here.