I went to Visual Arts Expo (VAX) today and immediately saw a Macross booth, a Magic booth and a Gainax booth.

I went to the Gainax booth and immediately yelled "Furi Kuri! Furi Kuri!" at a girl wearing a colourful wig.

She didn't seem to know what this meant, and probably suspected this was some form of nerd sexual assault. The booth was littered with posters of Tenggen Toppa Gurenn Lagaan and Neon genesis Evangelion and some other shit that don't matter.

But no FLCL. No Furi Kuri. No Kare Kano either or Panty and Stocking or Re: Cutey Honey. But most importantly, NO FLCL!

In my list of top 5 anime of all time, FLCL is number 2. It is perhaps the best Gainax anime I have ever seen and something that is as important as Stephen King's The Body (Stand By Me) and Shawshank Redemption and ET and Star Wars and Teen Wolf all rolled into one.

It is simply THE PERFECT COMING OF AGE STORY that I have on occasion tried to emulate. I tried to capture the spirit of FLCL but have always failed miserably. But enough about me.

FLCL is about Naota Nandaba. This is a kid, like, 11 or 12 years old or something. His brother has gone to the States to play pro baseball. The brother is more of a father figure to him and Naota is living in his shadow. He is an ideal that Naota can't realistically achieve. The brother is the yardstick by which Naota believes the world measures him. The other adult characters are idiots.

The most obvious thing is the brother's girlfriend/ex-girlfriend/stalker whom he left when he went to the States. The girl keeps creeping on Naota, because he looks like his brother. Naota likes the girl, but feels that she only likes him because of his brother.

And THEN. A weird alien/magic creature/criminal called Haruhara Haruko enters Naota's life and smacks him on the head with a guitar that she wields like a chainsaw-bat. As a result, things start to grow out of Naota's head - usually some form of giant robot or whatever.

There's a lot of weird stuff in FLCL, including a police detective who uses dried seaweed as eyebrows, a robot with a TV as his head, a factory in the shape of a clothing iron and a bunch of other stuff.

But the most intriguing thing is Naota's growth and the development of the people around him who are not caricatures. Everything revolves around the very essence of coming of age stories - lessons in letting go.

Naota has a choice of three girls - the adult Haruhara Haruko, his brother's girlfriend/stalker/thing who is older than him and a girl his own age whom he accidentally kissed one time. He had to, at the end, say goodbye to each and every one of these girls even though he considered being with them forever like a dumbass simplistic child.

His ideal of making his brother's ex-GF his or going with Haruko on a galaxy quest are all childish notions that he needed to understand as being unrealistic and ultimately dumb.

Haruko is in fact searching for the greatest criminal in the galaxy - she is in love with an impossible man. She, as an adult, has made her choice and whatever, man.

The elder brother GF, she also needs to learn to let go of her obsession with Naota's brother. She in the end discovers the same shit Naota does and they both move on from his shadow.

I find that the final image that the ex-GF took with her camera to be extremely poignant and captures the series' intentions beautifully.

It's a boy from the back, holding a guitar that's a bit too big for him, looking at the sky. 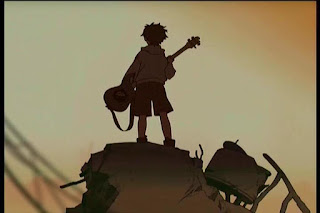 In sepia, of course. It's so beautiful, breathtaking and heartbreaking and hopeful and so much of life and memories and love and loss in just one image.

It's from the back because this is all the past - we are watching the past. It's everyone's past. We all went through this, or for younger people, this will be forgotten one day. At his feet are ruins of something because in order for change to happen, things must be destroyed. He is standing on the ruins necessary for growth and development.

The guitar is also Naota's brother - it represents expectations and responsibility on Naota's shoulders. It is also life and all its expectations. Naota is facing the future and his upward gaze is one of hope.

This still image, after all the craziness of Haruhara Haruko - which on second thought could be symbolic of puberty - captures the essence of growing up in one moment. The heaviness and awkward nature of expectations, the hopes and dreams of anyone as they grow up.

FLCL is a work of art. It is pathos and nostalgia and sci-fi and sex and wanking and just wonderful.

So there was no FLCL at the Gainax booth. Boo fucking hoo. It lives on inside me.

FLCL Forever!
Posted by Amir Hafizi at 2:11 AM